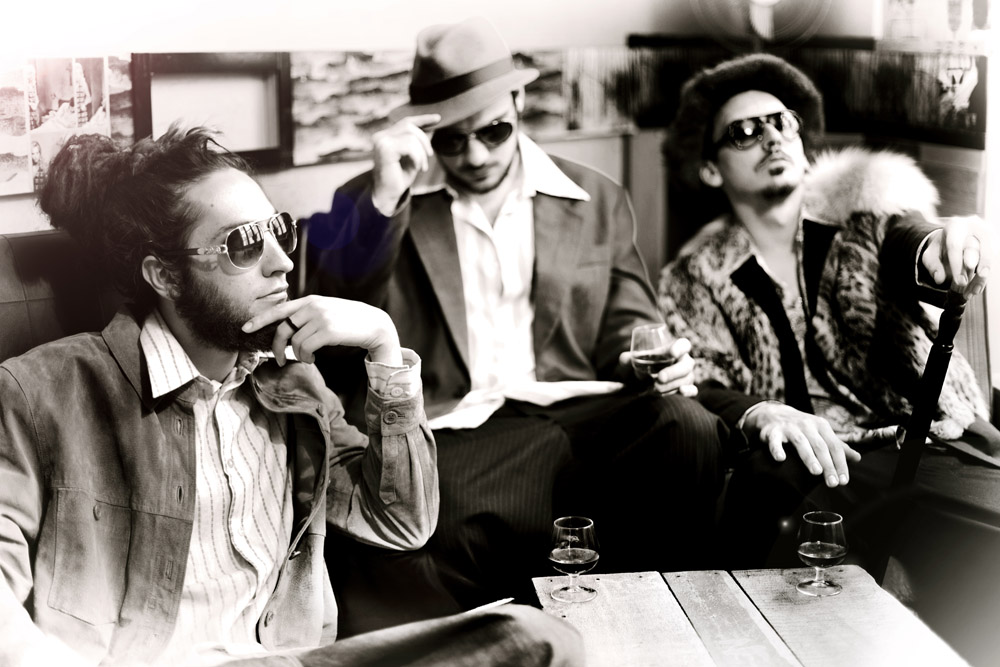 A State of Mind

Classic Madlib at his best. I remember when I first realized that Quas was just Madlib pitching up his voice, and went crazy. One of the most distinctive and powerful musical universes created by one person.

An album of deep funk genius. First discovered “Brothers on the Slide” on a skate video called Mouse, in 1997 – directed by Spike Jonze. This one really sets the bar.

We went to an American international school in Germany in the late 90s/early 2000s, so German hip hop was a big influence on us at the time – the jam culture, graffiti, and the funk and jazz heavy beats and socially conscious, intelligent rhyming. This album really defines our childhood.

Had a cassette of this back in the day. Great use of jazz violin and it’s a classic that never gets old.

A sampling goldmine. Tribe, Charizma and PB Wolf, Dilla, 4 Hero, all sampled it.. Beautiful voice, beautiful orchestration, intense soulful emotion.. this album has it all.

Heavy roots-dub album and Barrington is the ultimate roots crooner.. Like the Sinatra of reggae. This is maybe his greatest work.

DOOM re-emerging from 5 years hiatus after the happy-go lucky self-empowering KMD releases.. definitely with a darker edge, the word-play and rhyme-flips are second to none on planet earth. This release marks the birth of our all-time favourite MC. All hail the Villain!

Just about qualifies as an album, as it only contains 2 tracks. We had to include a Fela release, as afro-beat has been a massive influence, and Fela has to be the ultimate grand-master, both musically and in terms of activism and inspiring social change. Water No Get Enemy is the ultimate set-closer.

Crazy, funky, golden-era hip-hop; young and carefree; spontaneous and raw. 100% raw hip-hop illness. Timeless beats, and so much humor in the rhymes, which is rarely present in music nowadays.

Stellar work of individual brilliance. Maybe the best songwriter and poet of the past century.

Amazing early ska record with raw positive emotion signifying a social and musical revolution which influenced the future of Jamaica and the rest of the musical world.

The Supremes – Where did our Love go?

Timeless classic. So many huge anthems which i’ll play to my children’s children when explaining what soulful, genuine music is.

The start of yet another new era of Jamaican music and in what would eventually become MCing. In this case over beautiful rock steady riddims. Soulful expression of rhythm and rhyme galore.

It was between this and "The Low End Theory" for us, both classic albums but we feel like Midnight Marauders is Tribe at it’s very finest. With Q-tip as on point as he’ll ever be (both rhymes and production) and Phife is at his highest potential. Arguable the best hip hop album ever.

I think at some point I’ve sampled every single track on this album. Whenever I needed some inspiration i’d always turn to this. It’s less known than a lot of his albums but really worth checking out.

The Jazz Crusaders – The Best of

I shouldn’t really pick a "best of" Compilation but with over 40 albums credited to them it’s just too hard to narrow it down. I remember sampling them for the first track me and FP ever made together back when we were 16 years old. They were fronted by a two piece horn section (trombone and tenor sax) which for years was our choice of horn section plus with Joe Sample on the keys you just can’t go too far wrong.

Jazz-guitar at its best, and one of the great jazz-funk fusion records. Contains the all-time classic “Sookie Sookie”.. He’s released a lot of incredible material, but this is maybe the one that was most significant to us growing up.

Legendary album that marks a significant evolutionary step in the history of jazz. The introduction of electric instruments and a psychedelic rock edge make this one of the corner stones of modern music.

The list couldn’t be complete without at least one Dilla-produced record. This one really captures his genius as a beat-maker and his percussive swag as an MC. “Untitled/Fantastic” is up there as one of our favourite works of musical expression of all times, irrespective of genre.