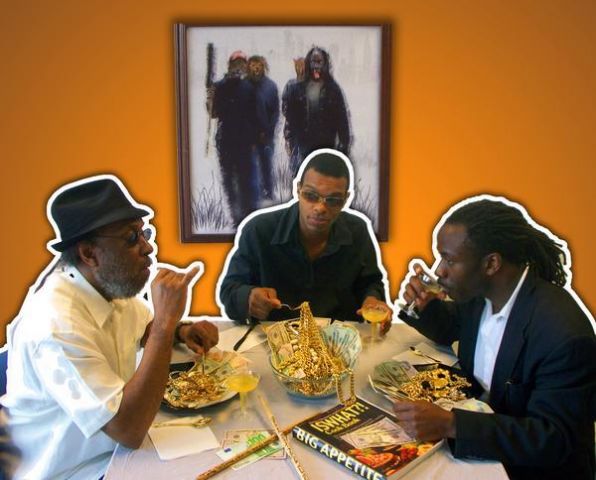 1. Pouring Rain – Fishbone
Most of my favorite songs have great basslines, obviously… and this one does…

2. There is a Light That Never goes Out – The Smiths
There is a song for every time period in one’s life and this one marks a period in my life of knowing what I want but not knowing how to get it…. Morrisey eloquently sings right to me on this track…

3. Pictures of You – The Cure
Disintegration(the album) is one of my favorite records….and I have to say Pictures of You is one of the best songs to listen to about 6 months after the breakup and you’re feeling regret… HA! Thanks alot Robert… So According to interviews, the inspiration of the song came when a fire broke loose in Robert Smith’s home. After that day, Robert was going through the remains and came across his wallet which had pictures of his wife, Mary.

4. Is Chicago Is Not Chicago – Soul Coughing
It’s tough to isolate just one Soul Coughing tune but I did it… The bassline on this tune is just BAD!!! ’nuff said

5. Crossover – EPMD
I think this is my favorite EPMD song because of the Zapp sample they used… As one of my friend Kalcha would say…"Brilliant!"… but its also ironic because it’s their sellout song and it’s one of the hookiest they ever made. Hmmm…

6. Pop Life – Prince
This is another bassline song… but did you know that it was recorded BEFORE Purple Rain was completed?….
indicating the new direction Prince wanted to take after the movie? I bet you didn’t

7. Gravity – John Mayer Trio
John’s 6/8 medium tempo tune is one of the high points on the album Try! that I have… it’s one of his best songs and Steve Jordan and Pino Palladino are the perfect rhythm section to make this song shine

8. Naima – John Coltrane
This is one of John’s most beautiful songs… he was in a special place when he recorded this where his love for his wife and his spirituality within himself met… The song is graceful and resolute…

9. Mountain Song – Jane’s Addiction
"Coming down the mountain!" Eric Avery’s E minor bass line is instantly hooky as it is agressive and raw… Perry Farrell lyrics and passion are otherworldly IMHO….it was released as a single; however, Mtv refused to air the song’s music video due to a scene containing nudity

10. Leave Home – The Chemical Brothers
"Tha brothers’ gonna work it out"…Almost 15 years after it was created this song has so much groove it’s sick… of course the bassline is just slammin! Plus the amount of creative sequencing and layers of sound make this one an instant classic. The song contains a short sample from the Kraftwerk song "Ohm Sweet Ohm" from their album Radio Activity

Curtis Mayfield is one of my all time heroes.
I could list so many of his tracks;but this one always seems to lift my spirits.

Hes got to be my all time favorite soloist.
This one is just ridiculous.So lyrical and soulful.
From the live album of the same title.

I AM TRYING TO BREAK YOUR HEART-WILCO
1st track off their masterpiece Yankee Hotel Foxtrot.
Great lyrics and incredible production.

COMIN AND GOIN-JIM PEPPER
Hamid Drake introduced me to Jim`s music while we were on ISWHAT?! tour.He is also featured on drums on the album of the same title.
Jim was a Native american sax player and he combined Native songs with american jazz and gospel.There has never been anything like it then or since.
You can really feel the depth of emotion in the words:"It`s good were we`ve been andwhere were goin…"Being Native myself, I am so inspired by Jim and his combining indigenous and african american music.So unique and beautiful.

AFRICA TALKS TO YOU"THE ASPHALT JUNGLE"-SLY AND THE FAMILY STONE
There`s a riot goin on is one of my all time favorite albums.I`ve listened to this one hundreds of times and never get tired of it.

EVERYTHING IS EVERYTHING-DONNY HATHAWAY LIVE
Wille Weeks takes what has to be the greatest bass solo Ive ever heard.
So melodic and grooving I`ve never heard anything like it.

GOING DOWN SOUTH-BOBBY HUTCHERSON
This song for some reason really hits me.Joe Sample on pianoplays a simple vamp with Wilton Felder on bass and Mickey Roker on drums holding it down.
Harold Land Plays soulful tenor Tenor around the melody and Bobby`s viruosic vibes.

NEVER CAN SAY GOODBYE-THE JACKSON 5
There will never be another MIchael.I just picked this up on 45 recently and it always blows me away.

Freedom Suite – Sonny Rollins, Oscar Pettiford & Max Roach, hard swinging, marching tune…
I first heard it as recorded by the saxophonist, David S Ware Quartet… with drums by Guillermo Brown, bass by William Parker & Matthew Ship on piano. I like both version but Sonny Rollins original from 1958 is one of my favorite recordings ever…

Survival of the Fittest – Mobb Deep : 1995 hard east coast hip-hop.
This song takes you to the dark places of Queens Bridge projects, will make you get ready for the streets or stay home for saftey.

Poetry – Boogie Down Productions : could be considered the OPUS of the album "Criminal Minded" raw and steady; Bringing attention to a fresh sound coming from the Bronx in 1986.

Freedom Suite – Sonny Rollins, Oscar Pettiford & Max Roach, hard
swinging, marching tune… I first heard it as recorded by the saxophonist, David S Ware Quartet… with drums by Guillermo Brown, bass by William Parker & Matthew Ship on piano. I like both version but Sonny Rollins original from 1958 is one of my favorite recordings
ever…

Survival of the Fittest – Mobb Deep : 1995 hard east coast hip-hop.
this song takes you to the dark places of Queens Bridge projects, will make you get ready for the streets or stay home for saftey.

Poetry – Boogie Down Productions: could be considered the OPUS of the album "Criminal Minded" raw and steady; Bringing attention to a fresh sound coming from the Bronx in 1986.
All Along the Watchtower – jimi hendrix.. this medival tale remids me of America, the music industry, a battle ground and a prison yard all wrapped in one. We I hear jimi sing it it I almost feel vengance on the wicked people I’ve known.

Strange Fruit – Billie Holiday… this song should be required listening in the USA… before kids can began High School they should be able to recognize the story and relevance behind "Strange Fruit"… we can not forget where we were, it will help us appreciate how far we have come and why we can NOT go back

Bring The Noise – Public Enemy: 1988 Hip-hop might be sometimes as good as this song but for me it will never be better than "Bring the Noise" .. its Fierce !!! fierce I tell you !!!!

My Adidas – Run DMC: 1986 Adidas sneakers will always be cool and a quasi rebel fashion statement for Hip-hop heads because of Run-DMC… going to Hip-hop function and you are unsure about your Hip-hop credibility ??? put on some Adidas and no problem. this song was sooooo influential. ADIDAS is indebted to RUN DMC & Hip-hop kids everywhere

Steve Biko – A Tribe Called Quest: if you pay attention to Hip-hop millions of references are being made to all sorts of things. Sometimes it causes you to research and sometimes you stumble upon the true meaning and get the point of the reference suddenly by mistake.. for me I always loved this track on the Midnight Marauders album, (1993) but when I learned who Steve Biko was the song really became one of my theme songs.

Demons Galore – The Beatsteaks: this piece give me a rush !!! even as I type this I have to pull it up on youtube and let it play, cant wait to get a chance to see them live !! I only know the The BeatSteaks from channel surfing in ahotel room in Austria. Righteous band. For me the song & video mocks the greedy war monger virus that is the human race.

Follow the Leader – Eric B & Rakim: 1988 tracks like this are the reason Rakim will always be mentioned when you ask about greatest MCs ever… if the person knows Hip-hop for real, they will say Rakim within the top 5 MCs ever. He was so advanced you could only follow and try to keep up. Wicked flow, perfect lyrics. Absolute poetry, with calm force.